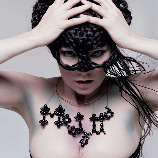 the album "medulla" by bjork is inspiring to
me. i think about the word "medulla" a lot

Bjork struggled to find a title for the album. She said that something in her "wanted to leave out civilization,
to rewind to before it all happened", wondering, "Where is the human soul? What if we do without civilization
& religion & patriotism, without the stuff that has gone wrong?", originally calling it Ink, as she wanted
the title to represent the five-thousand year-old blood which is inside of human people, a passionate &
dark ancient spirit, a spirit that survives. Her friend Gabriela then suggested "Medulla", a medical
term for bone marrow in Latin. She complemented that it was not just bone marrow, but marrow
in the kidneys & marrow in the hair; it is about "getting to the essence of something".

At the time of its construction, Bjork considered Medulla to be her most political album, saying that it countered
outbreaks of racism & patriotism that followed the 11 September attacks. "On 9/11, in the space of a half an hour,
this became the most patriotic place on earth", she recalled. "I remember describing to my friends on my phone that
[if] I turned 180 degrees anywhere I was in New York, I would count at least 37 American flags. So it was kind of
scary for a foreigner to be here". Regarding the album's composition, Bjork also mentioned that she tried to find
the common soul in everything, outside nationality & religion, whilst elaborating that she felt that "in that
sense, it's a greatest hits of human spiritualism [laughs]. I think it's the first time I have done an album
while I am reading the news. These are crazy times. It just seems that patriotism is a bad idea. I don't know
how directly the album reflects that, but it is sort of anti-patriotic. Anti-Iceland as much as anti-anything".

"medulla" to me is like the opposite of when someone is in a place where they're kind of alienated from their humanity in that
their expression is unintentionally an impersonal expression of cultural artifacts that don't draw from as much humanity as
they could? maybe they've learned how to engage with the world & others in a way that imitates media that itself imitated
life but didn't portray it with the most sincerity, or optimism about humanity, or didn't encourage vulnerability, or
something. or they're echoing aesthetics that don't really have anything behind them? also what bjork said about
politics/religion ... the notion that love & empathy are core aspects of people & the suppression of them for
religious/political beliefs is an active exception being made to someone's nature, distorting them as a
person ... the word doesn't make me think "abject opposition to all that bad stuff" as much as the
ideal of having avoided it all in the first place, or at least found the wherewithal to abandon
it. not having to think about it. it specifically makes me think of unfiltered connection
between people, & unfiltered conception of oneself, in a language of universally
understood concepts with no cultural artificiality. human-ness. marrow ...
trying to form the most productive possible synthesis of one's condition
as a mammal & one's condition as a conscious person. expressing love,
saying & doing things out of love, not being internally separated from love